A Card for the Sugar Bowl and Sugary Sunday Challenges 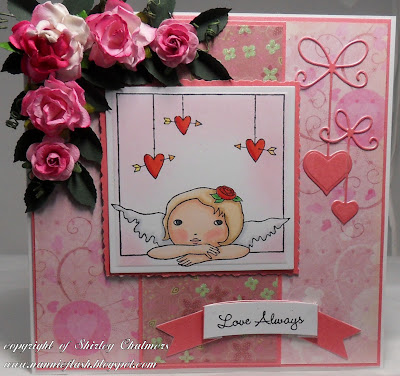 Good Afternoon Crafters, yes I know Ive let you down again, Ive been rather busy this week trying to get ahead with my DT work as I know Im going to be having two of my grandsons down for a week in July, and in the meantime we are of to Norwich this weekend for my great grandsons Christening and then to Looe, Cornwall at the beginning of July, and I know I shall want to sort myself out before we go so thats why I have been trying to get ahead of my DT work, and hopefully we are almost there. Anyway to make up for it I created this card for this weeks Sugar Bowl and Sugary Sunday (Facebook) Challenges and have used this Leanne Ellis image, its been a long time since I have used any of them and the Sugar Bowl Blog are promoting them again hoping they might come back in fashion, so I thought Id give it a go.
I have stamped her onto white card then used my copic pens to colour her, afterwards I have used a square Nestabilitie Die to cut it out, and then used a Deckledge blade to create the mount for it out of pink card. The sentiment is one from my stash and has been mounted on a folded tag from La La Land.
The base card is a 6"x 6" white card with a first mount of pink card, the papers are from First Edition "Love Letters" and I have used two papers from it, the base one is a pink background with a heart swirl pattern on and the second is a strip of patterned paper down the middle with flowers on it.
I have placed the mounted image in the center with the sentiment at the bottom on the right, I have also cut out with a Memory Box Precious Hearts Die two hearts and placed them at the top on the right. To finish of I have used 5 roses in various sizes and some punched out rose leaves in a spray at the top on the left hand side.
This Card is to be entered in the following Challenges:-
http://www.addictedtostamps-challenge.blogspot.com.au/
http://atsblog.typepad.com/wednesdayschallenge/
http://www.bellichallenge.blogspot.co.uk/
http://elphinehouse.blogspot.co.uk/
http://freshbreweddesigns.blogspot.co.uk/
http://www.inklingsandyarns.com/
http://perfectsentimentschallenge.blogspot.co.uk/
http://whimsyinspires.blogspot.co.uk/
http://www.wordartwednesday.blogspot.co.uk/
http://sugarbowlblog.blogspot.co.uk/ 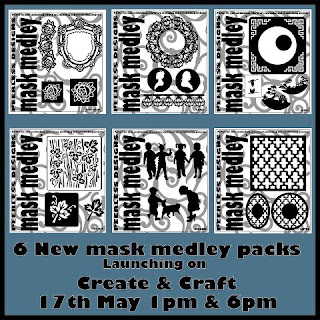 On Friday this week Sarah has 6 brand new masks to show you and has even bought back her earlier sell out ones as well, they will be previewed at 1pm and 6pm and I do hope that you will be watching Create and Craft then.
I have also been creating some samples for you, hope you like the results. 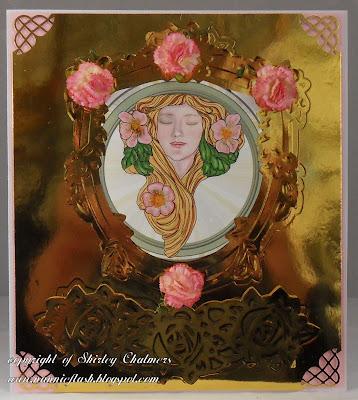 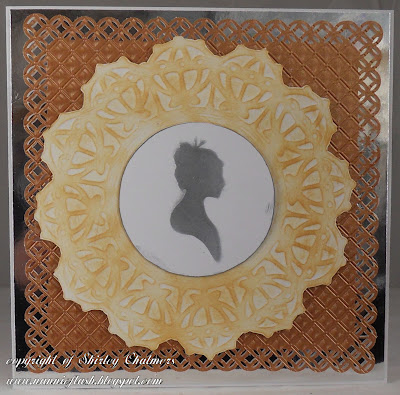 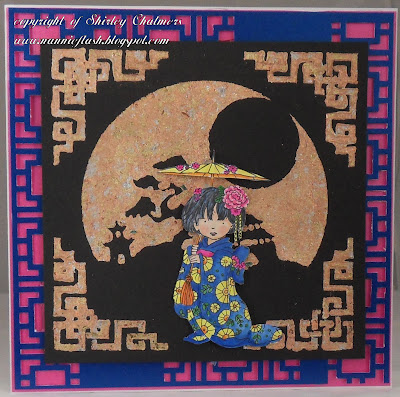 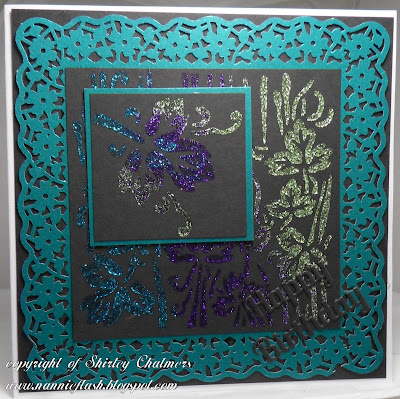 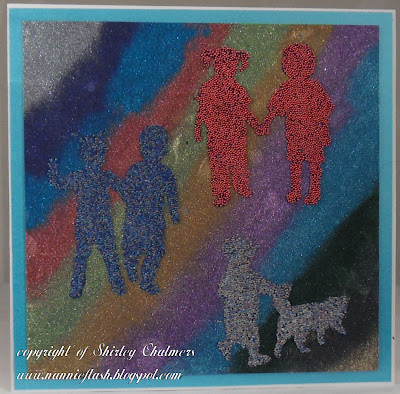 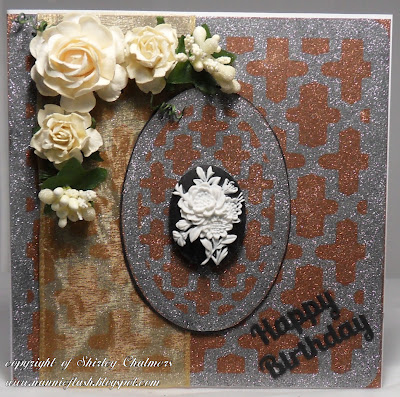 I hope you will be watching Create and Craft as see what the rest of the Design Team have created for Sarah, they are absolutely stunning.

One of Janet of Pink Gems new digi Stamps 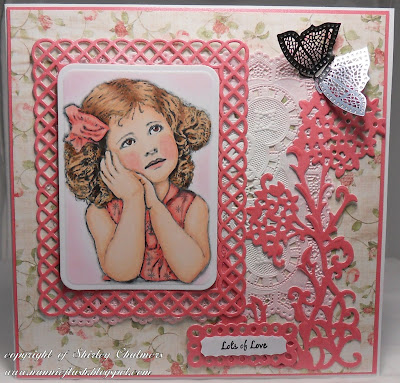 Good Morning Crafters, I hope your all ready for another week of crafting and those in the US had a lovely Mothers Day. On Sunday I bought 6 of Janet's (Pink Gems) new Vintage digi images and I think they are gorgeous, this little girl is "Harriet" and I have printed her onto white card then used my copic pens to colour her, afterwards I used the curved rectangle dies to cut her out, I also used a pink ink pad around the edges. The mount I have used is the new Curved Rectangle die and this was cut out with pink card, the sentiment is also used with the small die from the same set.
The base card is a 7"x 7" white card and the first mount is a piece of pink card, the papers are from LOV Nitwits papers, and then on top I have put a square doily thats had the edges distressed with the same ink pad as the image. I then used some more of the same pink card and one of the "Butterfly" Foral dies from Tonic and placed it in the right hand corner.
I then placed the mounted image towards the left and the sentiment below the image towards the right. The last flourish is one of the metallic butterflies thats been moulded and stuck at the top of the die cut.
This Card is to be entered in the following Challenges:-
http://www.fashionablestampingchallenges.com/
http://scrappyfrogschallenge.blogspot.co.uk/
http://sentimentalsundays.blogspot.co.uk/
http://corrosivechallengesbyjanet.blogspot.co.uk/
http://pinkgemchallengeblog.blogspot.co.uk/ 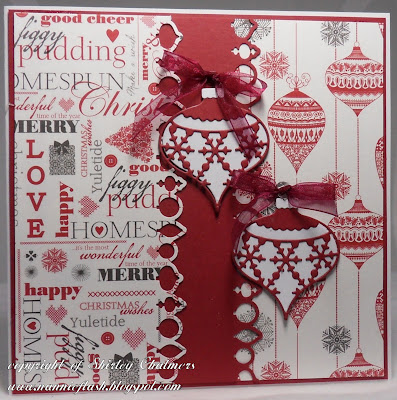 A Card for the Sugary Sunday and Sugar Bowl Challenges 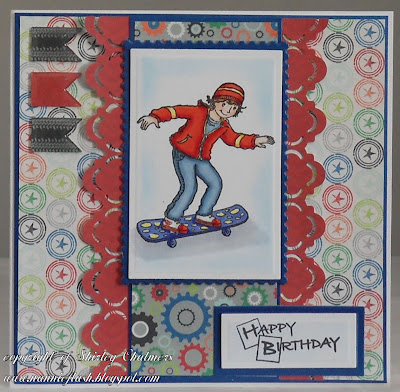 Good Afternoon Crafters, well Ive been a busy girl this week, I found out today that I had to replace a DT card that I had wrongly done and that I have been creating for samples for my friend so its been all go in the Chalmers house, but I did get this card done for this weeks Sugary Sunday "Mens/ Boys Birthday" and "Anything Goes" Challenge over on the Sugar Bowl, and I have used this boy on a skateboard for my main image, and this is from Funky Kits, and Ive had it quite awhile but have never used it, hope you like it.
The image was stamped onto white card then I used my copic pens to colour it, afterwards I used one of the new Nestabilitie rectangle dies to cut it out and a postage stamp larger one for the mount which I have used on some dark blue card. The sentiment is one from my stash and that has also been cut with a smaller rectangle die and mounted on a larger one.
The base card is a 6"x 6" white card and the first mount is a blue card, and the papers are from the Sweetshoppe Digi "Pop and Wheelie" digi paper set, the first paper is a white background with circles and stars on in several colours, the second is a strip in red with a zigzag pattern on and I have used one of the new EK success punch one it and placed it down the middle, then on top is the third paper which is a beige background with several different sized cogs in many colours and this was placed on top of the red paper.
The mounted image was then placed in the middle towards the top and the sentiment was placed down below on the right hand side. And to finish it of I have used three banner epithany buttons and some of the left over paper and these where placed at the top on the left hand side.
This Card is to be entered in the following Challenges:-
http://sugarbowlblog.blogspot.co.uk/
http://clearitoutchallenge.blogspot.co.uk/
http://www.lovesrubberstampschallenges.com/
http://papertakeweekly.blogspot.co.uk/
http://www.craftdoormagazine.com/ 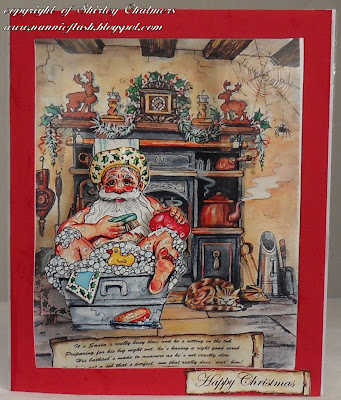 This weeks Challenge over on Facebook for Sundays with Santa is "Humour" and I have used this Just Inklines image for my card, its a easy way out of a difficult decision, what to use for it.
I want to thank you for the lovely comments over my problems since having my colonoscopy over a week ago, it seems I have picked up a rather nasty infection which is causing no end of problems, Im extremely sore underneath and its not clearing up even though I have visited the doctor twice last week and have had several different creams to sort it out. The last thing I had was some antibiotics on Wednesday, Thursday I discovered Im extremely allergic to the Penicillin and Im now so itchy and spotty that I dont know how to calm it down, its driving me mad, I just hope it soon clears through my system, as what with the soreness and now this Im not feeling like doing much crafting. Im also making some samples up for my friend Sarah Hallam, so Im concentrating on getting them done instead, so please forgive me for not visiting you and leaving comments. I do have another two appointments for swabs and the doctors next week as I really dont want to have to cope much longer with either of my horrible conditions.
Please forgive me for being so graphic with my post, and I have printed the image onto photo paper then cut it out and mounted it onto acetate and a cut out card, with the background inside. 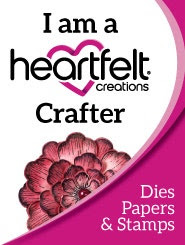