A Card for Facebooks Sundays with Santa 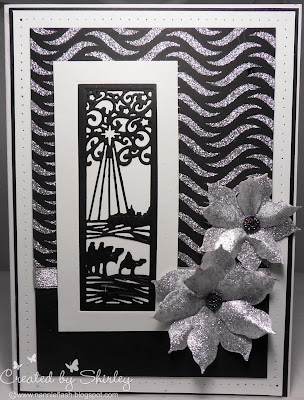 Good Morning Crafters, its been a extremely busy weekend for me and I didnt get around to checking the theme for Sundays Facebook Challenge and as I had decided to create this card using the Sue Wilsons products I thought I would enter it instead, but it seems I was right on trend as this weeks theme was all about "Flowers" thats a bit of luck wasnt it?
Firstly I want to warn you about something that happened to me during last week and I would like to give you the go ahead incase it ever happens to you, a month ago I had my credit card details on Amazon hacked and someone helped themselves to £150. of gift vouchers, as I had not spend them (luckily Amazon always send me receipts when I have bought something) I had to go through the procedure of proving it wasnt my purchases, luckily I was able to proof it and they recompensed my account by removing them, but I also had to cancel my credit card and be issued with a brand new number.
I dont know if you can guess I had the old number linked to several accounts and one of these was Create and Craft, and as I had bought something on flexi-pay it was linked to the payments on this, and they (I had changed the details and put the new card details on their website) tried to get payments from the old card to cover the flexi-pay plan, and instead of contacting me directly as soon as the 1st payment was refused they tried again then sent me a letter. To cut a long story short I had to contact them by phone to change the card payment details to the new one and I was charged £15.00 for the pleasure of not doing so before, so be Warned if you have to change your credit card number during a flexi-pay plan ring them to give them the new details otherwise you also will be charged. I did ask them to let other buyers know of this problem but whether they will is another story.
Anyway to get back to my card, I used a mask for the background with Silver glitter texture paste, and this was also used on the poinsettia flowers. The strip is the 3 kings and they are all from Creative Expressions.
This Card is to be entered in the following  Challenges:-
http://christmascardchallenges.blogspot.co.uk/
http://cagichallenge.blogspot.ca/
http://lacysunshine.blogspot.co.uk/
http://lilpatchofcraftyfriends.blogspot.com.au/
http://onestitchatatimechallenge.blogspot.co.uk/
http://www.scrapbookblessingsclub.com/
http://welove2create.blogspot.co.uk/

Posted by Nannieflash at 10:57

Hey, Shirley. This is a very pretty card. I love the silver poinsettia. Thank you for joining us at Come And Get It challenge. Bunny DT

Gorgeous card, fab flowers. What a pain when something like this happens but glad you sorted it out in the end, never boight anything from c and c myself x

Love the black and white! Wonderful construction!
Thank-you for joining us at Color Your World!

Beautiful. Love the poinsettia in silver and all the details on your card. Thanks so much for joining us at Christmas Card Challenges.
Sorry to hear about all your troubles with your credit card being compromised. I have had that in the past also.

I love this card-very masculine but also great for a woman too and love the silver bling. That is horrible what happened to you. This is why I am always so cautious about doing things like this on the internet. I am glad you were able to get it all rectified. I wonder if they will find out who did this. Did you call the cops or whoever takes care of this??

An elegant and gorgeous card, I'm very taken with this. Thank you for taking the time and sharing your creativity with us at OSAAT this fortnight, I hope you have enjoyed playing along as much as we have enjoyed seeing your talent. Love 'n' hugs Sall OSAAT DT.

Beautiful card, Shirley!
Thanks for joining us at Scrapbook Blessings Club! :o)

what a pain in the butt with your credit cards. i always worry about something like that happening to me. Glad you have it all sorted now though.
You have made a fabulous card here. I love the monochrome look. well done.
thank you for joining us over at lil patch of crafty friends
Erica DT

Congrats on being an August challenge top pick over at Scrapbook Blessings Club. Thank you for playing along. Nannieflash
Hi, My name is Shirley, and Im a 77 year old wife and grandmother, Ive been papercrafting for about 13 years, but have always been into knitting, sewing embroidery, painting and drawing, anything I can get my hands on. My husband who's now retired is long suffering man who fortunately encourages me in my craft and 'Im really grateful for that. I have three daughters, and two step daughters, and between my husband and I we have 10 grandchildren, 4 girls and 6 boys and 3 great grandsons with a 4th on the way. My eldest grandson is 39 and is in the RAF and Im so proud of him, hes married with two gorgeous little boys. Our other grandchildren range from 1 years upwards. I also live in the Forest of Dean, Gloucester, its the most beautiful place and I love living here. I sincerely hope you will enjoy looking at my attempts in craft making. I should also explain the origin of my name Nannieflash, this is what my grandchildren call me for the obvious reason, Im forever taking photos of them, and now my step-daughter has been christened Mummyflash for the same reason.