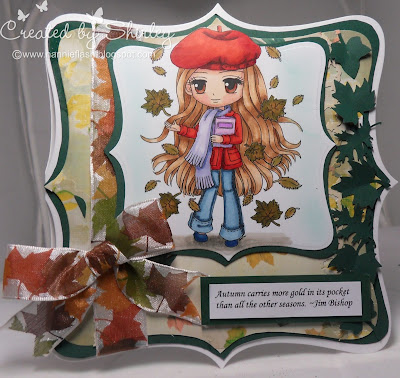 This months Facebook Challenge for ArtbyMiran is a "Anything Goes" one but with a twist is has to be on a shaped card, so I took a large sheet of white card and cut out the shape you can see with a Go Kreate Die.
The image was printed onto white card and I then used my copic pens to colour her, afterwards I used a smaller shaped die for her and drew around the die to create the mount out of green card.
The base card is about 6.50"x 6.50" white card with a first mount out of green card and the papers are also from ArtbyMiran which was a freebie on Facebook, I have used two papers the first an all over leaf one in various Autumn colours and the second which is difficult to see is another from the set cut in a strip and I used a Martha Stewart Leaf border punch down two sides and placed in on top down the middle of the card.
I then wrapped a ribbon which I removed from a very old card and laid it down the left hand side and the mounted image in the middle. The sentiment was one I found on the internet and then placed this also on a piece of green card it was then stuck in the bottom left hand corner on top of some punched out leaves.
This Card is to be entered in the following Challenges:-
http://artbymiranchallenge.blogspot.ca/
http://www.craftysentiments.blogspot.co.uk/
http://deepoceanchallengeblog.blogspot.co.uk/
http://diecuttindivas.blogspot.co.uk/
http://www.ttcrd.blogspot.co.uk/
http://tuesdaytaggers.blogspot.co.uk/

Posted by Nannieflash at 10:46

So lovely! Gorgeous!
Thank you for joining TIOT's !
oxo
Susi

Very beautiful with a great shape

Thank you for joining us at Try it on Tuesday

This is fabulous, love the design, the image is lovely and what fantastic ribbon!
hugs Jacee
Simply Paper Card Design

sweet scene, love the ribbon & dies. Thanks for joining us for our 'Anything Goes' challenge #41.
Alicia (Art by Miran DT)
MaxiBelle Studio

How pretty! Love all the leaves!! So glad you came Through The Craft Room Door to play! Can't wait to see more of your talent!
Hugs,
Karen C

This is such a sweet image and great card. It's perfect for our challenge at Crafty Sentiments this week. Thanks for joining us! Julie, DT