A card using a ArtbyMiran image 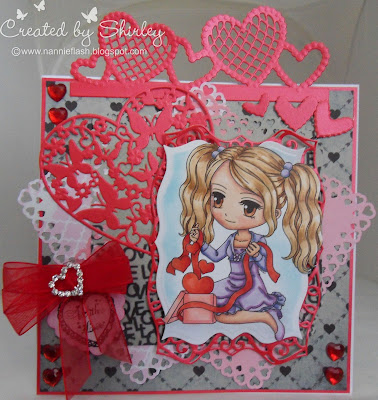 Good Morning Crafters, its a week since I posted a card here, and this was one I made last week using a image that I coloured before having my cataract operation, as Im having to limit my card creating at the moment, I will so glad to get back to normal in a couple of weeks its so limiting.
Anyway this image is titled "A Gift of Love! and Ive coloured her with my copic pens before cutting her out with a Spellbinders Nestabilite set of dies, and I used a fancy one for the mount.
The base card is a 6.50"x 6.50" white card with a first mount out of red card the papers are also from ArtbyMiran called "Love" and I have used four of them for the layers on this card and theyve been cut with a Martha Stewart corner and border set of Heart design.
I then cut out the heart border from Marianne dies and the large die was also cut with a Marianne die. The card was then layered up as shown and to finish of I have used a sentiment from the same image set and tied a triple bow and stuck this about it.
To finish of I have used some heart gems in three of the corners.
This Card is to be entered in the following Challenges:-
http://www.2creativechicks.com/
http://artbymiranchallenge.blogspot.ca/
http://cardsgalorechallenges.blogspot.co.uk/
http://cccdigicreations.blogspot.co.nz/
http://doodlepantryblog.blogspot.co.uk/
http://justkeeponcreating.blogspot.com.au/
http://karleighsuechallenge.blogspot.ca/
http://mariannedesigndivas.blogspot.co.uk/
http://noordesign-uk.blogspot.co.uk/
http://thesistersofcraft.blogspot.co.uk/

Posted by Nannieflash at 11:14

Hi Shirley I love this little beauty the image is gorgeous so is the card design those die cuts look amazing. I hope that you had a wonderful Christmas and New Year, mine was quiet but pleasant
hugs
lorraine x

This is great Shirley, fab colour, sweet image and I love how the design goes over the edge, lovely!
Hugs Jacee
Simply Paper Card Design

Gorgeous card!! I love your sweet image and all the beautiful die cuts!! I wish you well in your recovery!
Thanks so much for playing along with us at Doodle Pantry's AIMPDC 13!!

This is stunning. Love all the hearts! Thanks for sharing with us this fortnight. Lisa CCC Digi Creations

A beautiful card Shirley, such a pretty image and lots of lovely details.
Pauline
x

Oh, so pretty! I just love all the die cuts! I'm so happy you joined us for the Doodle Pantry AIMPDC! I hope you will join us again soon.